The wolves are back!

It’s time to announce the next Two-Natured London book! The wolves of the Greenwood clan will finally return after two books about vampires: Crimson Warrior, which features Gabriel Hamilton, and Magic on the Highland Moor, with Nicholas Fortier, both vampire warriors of the Crimson Circle. And the two books before these, Magic under the Witching Moon, about humans and witches, and Moonlight, Magic and Mistletoes, a collection of Christmas stories, had hardly any wolves either. I love my vampires, but now it’s time to bring back the wolves.

The next Two-Natured London book is number seven—tenth overall if you count the shorter in-between books, which you should definitely read too. It’s called … drumroll … Wolf Moon. It’s about Jamie Green, the alpha of the Greenwood clan we’ve met a couple of times before, and Isla Shaw who was briefly introduced in the previous book. Theirs isn’t an easy love story, as both have suffered losses that have made them reluctant to embrace new romance. But if anyone deserves a happily ever after, it’s those two. 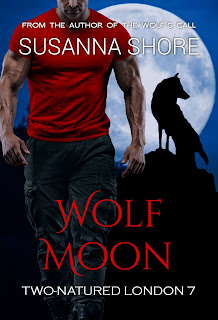 And here’s the blurb:

Jamie Green, the alpha of the Greenwood wolf-shifter clan, has come to accept that the mate his wolf chose for him has left him for another. But while the man has moved on, the wolf hasn’t. Then she unexpectedly dies, freeing the man and the wolf both. And now neither of them knows how to go on with their life.

Isla Shaw has secluded herself among her birth clan in Scotland to recover from the loss of her mate and son a century ago. But the death of the clan alpha has plunged her safe haven into chaos of a leadership contest. She needs a way out, but she has nowhere to go—until Jamie offers her a helping hand.

Jamie isn’t quite sure why he’s invited Isla to London. It’s not like his wolf has taken interest in her, even if the man finds himself drawn to a woman for the first time in a very long time. For Isla, the return to where she has been the happiest and the saddest is bittersweet, but it’s time for her to face the ghosts of her past—with Jamie by her side.

But London isn’t safe either. The evil enemy that has attacked both their clans before has a new target: the clan of Isla’s past. If Jamie and Isla can’t save them, the shifters in London will all fall. But the price for the safety may be too deep: their future happiness.

As the clan prepares for a battle, Jamie has to be the alpha, not the man. But what’s the point in fighting, if he doesn’t have Isla to fight for?

The book will come out at the end of February 2021. Preorder links will update on my webpage the moment I have them. Stay tuned.

If you’re new to the Two-Natured London paranormal romance series, you should start with The Wolf’s Call. It’s available for free.

If you’d like to read more blog posts by me, I’ve been mostly on my reading blog this year, publishing my book reviews there. Check them out at Susanna Reads. And as always, you can find more about my books and latest news on my webpage.