I came across an essay on writing that I found very inspiring. It’s written by Chuck Palahniuk and it’s about using – or rather not using – ‘thought’ verbs in fiction writing. I recognised myself as the worst transgressor of his rule and immediately set out to improve my writing. 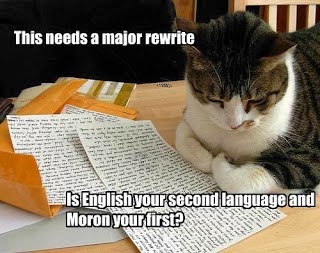 Palahniuk starts by stating that in six seconds you’ll hate him and he’s right. But he also promises that you’ll become a better writer for listening to him. Since it’ll take considerably longer than six seconds to learn to be a better writer, I can’t vouch for that yet. But I’m working on it.

What, then, are thought verbs and why you should avoid them? According to Palahniuk, thinking is abstract, and knowing and believing are intangible. You should allow your readers do the thinking and knowing and concentrate instead on showing the physical actions and details of your characters to your readers.

Verbs like think, know, understand, realise, believe, want, remember, imagine, desire and love are among those you should avoid. According to Palahniuk, writers most often use these verbs to open a paragraph and then use the rest of the paragraph explaining the thought. He finds it a lazy way of writing. Having tried his method for less than two weeks, I can assure his right. It’s so much easier to compose paragraphs around thought verbs.

I didn’t even have to read my published books to come up with dozens of sentences that I have formulated around one or more of these verbs. My characters know things, they suddenly realise something, they love and they hate. Sentences like that are easy to write, but they don’t necessarily make very interesting reading.

Palahniuk’s method sounds simple enough: instead of having your character think of an action, you should un-pack it, step by step. For that, you are allowed to use specific sensory detail: action, smell, taste, sound and feeling.

In reality, his method is extremely difficult to follow, especially in the middle of a writing flow. It’s easier to compose paragraphs that begin with something like “he wanted to growl in annoyance for her attitude” and then explain why that is the case. It’s much more difficult to take the sentiment apart and explain the same without using the thought verb: “Her attitude irritated him; he had faced it so often, yet from her it felt worse. His anger chafed him, demanding relief, so he growled.” The sentence isn’t that much longer than the original, but it took many times longer to write.

My decision to not use thought verbs has slowed my writing process considerably, so much so that I feared that the book I’m currently writing would never be finished. So I’ve compromised. While on a flow, I let the thought verbs come if they want to and compose paragraphs around them just to get my own thoughts written down. Next day, I go through everything I’ve written and edit it according to Palahniuk’s rule; a slow job.

I’m not entirely sure my writing has yet improved. The technique has, however, forced me to think of every paragraph and sentence more thoroughly than I otherwise would have, weighing each action and word against each other and the whole. No short-cuts are allowed, no easy ways out. And that can only be good.

Palahniuk’s essay is great. I recommend you read the original yourselves to learn everything he has to say. I recommend, too, that you try his method yourselves. If nothing else, it will keep your brain nimble. Who knows, maybe you’ll find it as exciting as I do and adopt it in your writing too.
- August 26, 2013