I wrote a short story. It’s basically an exercise in form, but I thought to share it with you anyway. It's not long. 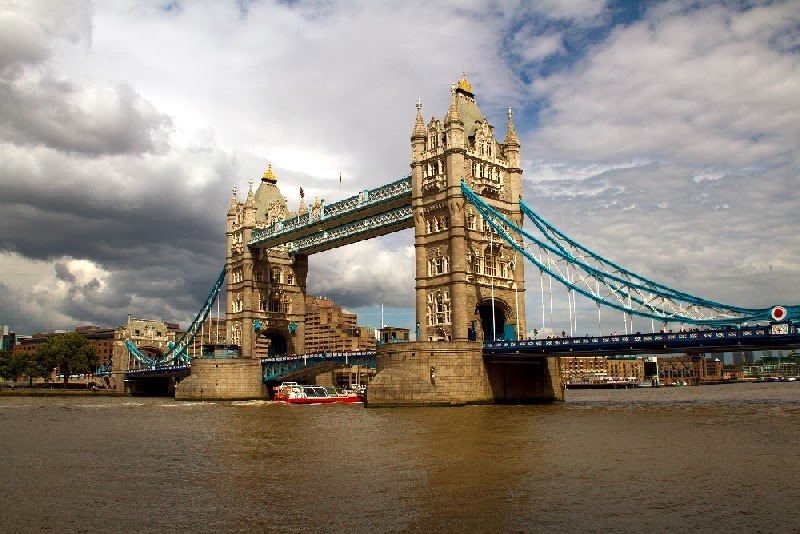 London. The summer of ’89. A family holiday. The Tall Ships Races were in town and the Tower Bridge had been opened three times that day already to allow the majestic ships to glide through. Epic traffic jams. The entire city was at standstill.

It was my first visit and I was excited.

We had spent the night at dad’s cousin. No idea where she lived to this day, other than that it was on the south side of the Thames. We had met her at her work – once we had found the place. We had the address, somewhere in Docklands, but no map that would have shown us how to get there.

Dad asked directions from an old man who spoke at length in what we could only assume was cockney. Dad nodded and said thanks and we drove off. We asked what the man had told him and he said he had no idea. He hadn’t understood a word.

We found a more helpful person who gave us good directions: “And whatever you do, don’t drive into the tunnel that goes under the Thames.” So, naturally, that’s where we ended up in driving.

We children considered the tunnel an exciting adventure; one that we got to repeat immediately, as we had to get back to the other side of the river. Dad was less thrilled. He had to drive in that traffic; a tough task for a small town man.

Dad’s cousin rode with us to her home so that went painlessly. It wasn’t far. She lived in a nondescript part of London: blocks of flats built close to one another, fairly modern brown brick erections. Nothing British about them, which I found disappointing.

She told us it was a restless neighbourhood, but we didn’t encounter anything sinister. We wouldn’t. We kept to indoors the whole evening. That we got to stay in such a dangerous neighbourhood added flair to our visit though. We didn’t actually want to experience anything scary. It simply made us more aware that we weren’t at home.

We took a train to central London the next morning. Like all tourists, we were utterly clueless, but there were helpful locals and we got to the right train.

Trafalgar Square. Chaotic and swarming with people. They were tourists mostly, loud and equally clueless. We tried to stick together so that we wouldn’t get lost in the crowd. Time before mobile phones, it was important.

Hot day. The hottest of a holiday filled with endless sunshine, with no wind to offer relief. But it had to be borne. We only had that day to see London. Dad didn’t like big cities and he wouldn’t consider staying longer.

We got on a sightseeing bus, a double-decker with no roof. We took upstairs seats to see better. Besides, the bus didn’t have air-conditioning so it would have been insufferable inside. Of course, sunshine combined with faux leather seats didn’t make the upper deck such a great choice either.

A sign said the tour would take an hour and a half. But there were those traffic jams.

It was the longest drive of my life. It felt like that at any rate. Nothing is quite as exhausting as sitting under a scorching sun for hours with nothing to drink, nowhere to flee. With no idea how to navigate the city, we were afraid to get off and continue on our own. So we stayed on the bus.

It took us twenty minutes just to cross a bridge. Which one, I have no idea. I had stopped paying attention to the tour guide by then. The loudspeakers were lousy and I couldn’t really hear anything anyway.

It’s the oddest things that stay with you. I remember a hospital, of all things. It didn’t look much – a grey concrete monstrosity – but the bus was stuck next to it for a long time. I had nothing else to look at.

I saw important cultural landmarks on that endless tour, but I remember the best a tunnel we crawled through. It offered some shade, but it wasn’t any cooler in there. Filled with the exhaustion fumes of all the cars stuck inside, the air was heavy to breathe and it tasted foul. I couldn’t wait to get out.

When we finally emerged, the sun hit us with full force again.

On we drove. After a while, I didn’t see the sights anymore. I could only think how thirsty I was, my tongue stuck to the roof of my mouth. I wanted the tour to end.

It took us three hours to get back to Trafalgar Square. First thing after getting off the bus, I bought a Coke from a vendor. My hands were shaking, making it difficult to open the can. I could practically taste the drink, feel it fizz on my tongue. It would be everything I had ever wanted and more.

I took a long, deep pull.

A bitter disappointment. My drink wasn’t cold at all but as warm as the air. A warm Coke doesn’t taste of anything. It didn’t feel like anything either, the bubbles non-existent. But it was wet so I drank it.

At a restaurant later, I had a proper Coke, cold with fizz. I had seen Madame Tussauds and the mummies at the British Museum, yet that is what I remember the best of my day in London.