“Hi, my name is Susanna and I’m a Twitter-holic.”

I don’t know if Twitter-addicts Anonymous exists yet, but I’m sure it’s only a matter of time. I don’t need an intervention yet – I think – but Twitter does hold most of my social media interest. And it takes much of my time that would be better used otherwise too.

Many users find Twitter annoying and confusing, however. I’m sure I would find it annoying too, if it weren’t for Tweetdeck, a browser app meant for making your Twitter use more effective. Since I passed a personal Twitter milestone last week, 3000 followers – thank you all, by the way – I thought to share with you why I like Tweetdeck so much.

1. Tweetdeck allows you to follow all your lists at the same time

You can organise all the lists you follow in columns and view them side by side, simultaneously. If you have many Twitter lists, you don’t have to jump between them in order to check them out. Of course, this is only useful to you if you already have created lists. If you haven’t, I suggest you’ll start with that. Even without Tweetdeck, lists make Twitter more enjoyable, especially if you follow thousands of accounts.

There is no limit to how many columns you can add. However, only a handful of them fit a regular sized monitor at the same time, even if you choose the narrowest column width. If you have dozens of lists and want them all on Tweetdeck, you’ll have to scroll a bit to follow them.

TIP: You can organise the columns by moving them sideways. Put the most important columns together so you can follow them on one screen without scrolling.

TIP: If you have large lists with prolific tweeters, divide them into smaller lists.

2. Tweetdeck allows you to keep tabs on your notifications

You can make a column for your notifications. That way you won’t miss your new followers, retweets and communications. If you have a lot of notifications activity, you can even add separate columns for @ mentions, followers and favours to make it easier to handle them.


TIP: If you have many twitter conversations, add a column for @ mentions to keep tabs on them.

You can make a column for a single user too. If you’re a Justin Bieber super fan, and don’t want to miss anything he tweets, or if you want to follow a single news source, for example, you don’t have to put them on a list to pick them out. Create a special column for each account. Or if you have multiple Twitter accounts of your own, you can add a column for each. It’s easier to retweet between your own accounts that way.

TIP: Create a column for your own tweets too to keep an eye on what you’ve tweeted.

TIP: If you have multiple Twitter accounts, the easiest way to create a Tweetdeck profile for each is to put them on different browsers to avoid signing in and out all the time.

4. Tweetdeck allows you to schedule tweets

I occasionally schedule my tweets. Most of my followers live on the opposite side of the globe so they’re never around when I’m on Twitter. One or two tweets a night (my night, their day) reminds them that I exist too.

Another good use for this feature is when I have a lot of interesting articles or posts to share. Instead of dumping them on my followers all at once, I schedule them. It saves my time too.

It’s very easy to misuse this feature and schedule spam-like tweets to fill your followers’ timelines. Try to avoid doing that.


TIP: Twitter is about communication. Don’t schedule all your tweets or you’ll miss people responding to them.

5. Tweetdeck allows you to ignore most of your timeline

If you have aimed for quantity instead of quality in the accounts you follow, you may have created a timeline where no one tweets anything that interests you. You don’t have to add a column for your main timeline, ‘home’, as it’s called on Tweetdeck, so you can avoid seeing most of your tweets.

I have personally chosen everyone I follow on Twitter, but among 3000 accounts, not everything is always worth keeping an eye on. The best content providers are on the lists, but I still have the home column too. I have, however, moved it out of sight so that the streaming of the tweets won’t distract me.


TIP: Even if you move the home stream out of sight, check it up regularly. 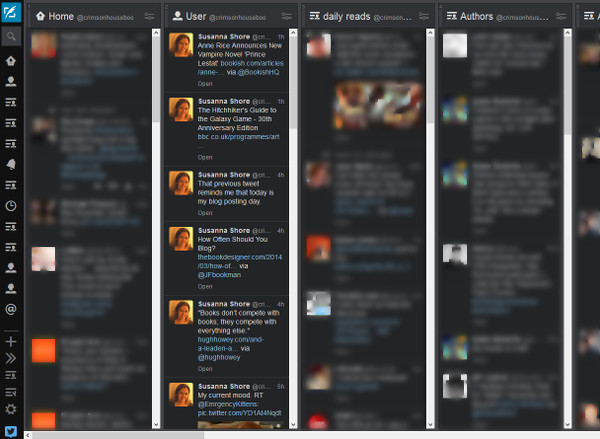