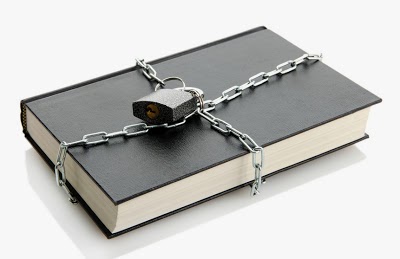 I write romantic books that have some adult content. Nothing over the top and the sex scenes aren’t the driving force of any of my books. But they might offend someone’s delicate sensibilities. So how long before that someone declares his or her sensibilities offended, writes screaming headlines and gets my books and those tens of thousands similar books deleted too?

A cynic would say that won’t happen. Romance is the biggest seller on e-books and likely a large part of it contains sex. There isn’t a vendor who would ban those books. But these things always start small.

Alice Munro, this year’s Literature Nobel winner, expressed it well in an interview from 1979 when pressure groups tried to have her book removed from libraries:

“As soon as one step is taken, you have to start resisting because that makes the next step easier … The people who are against the books, they somehow think they think if we don’t write about sex, it will disappear and it will go away.”

Even if we allow that we don’t exactly know how many or what kinds of books have actually been removed, hearsay all we have to go by, the matter is serious. Vendors are getting rid of self-published books on the slightest pretence. And it allows them to introduce censorship dictated not by what is legal or what people are willing to read but by what advertisers want to be associated with. Because, in the end, that’s what it comes down to.

At the time, the purge is targeted at the self-published material only. That is bad enough. How long before they begin to purge other books too? Books are being challenged constantly for the slightest reasons. Amazon and others have opened the game with this purge. How easy will it be for them to continue?

I find that frightening.

So far, I haven’t heard authors expressing their outrage for this, presumably because the books targeted haven’t merited it, for whatever reason. How about now that the larger purge has begun? Are we waiting for it to blow over? Your book could be next.