I finally have it! The name for the third Two-Natured London book. I have never had this much trouble coming up with a title for anything before. It wasn’t until I was writing the very last page that it dawned on me. Amazingly, I couldn’t immediately find books that would have the same name. That never happens. It requires a level of cleverness I have yet to reach. Except, it seems, this time. 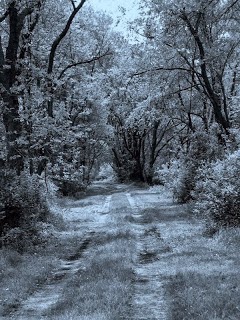 And the name of my book? A Wolf of Her Own.

I’m very happy with it. It’s short and romantic, and it fits the style of the earlier books closely enough, even if it’s not as short.

A Wolf of Her Own tells the story of Gemma Byrd, a vampire, and Kieran Garret, a wolf-shifter and it happens entirely in the countryside around the Greenwood wolf-shifter clan estate I introduced in The Wolf’s Call. They meet in less than ideal circumstances after wolf-shifters kill Gemma’s sheep and she accuses Kieran and the Greenwood clan of the deed.

There is plenty of action and great romance, heartache and some humour too. Many characters from earlier books make appearances, so if you want to make acquaintance with them before the book is released, now is a good time. A Wolf of Her Own should come out within a month. I’ll keep you posted. Or you can sign up for my newsletter and learn all about it before anyone else. For those who subscribe, there’s a free short story about Charly and Rafe, the characters from The Wolf’s Call.

Here’s the blurb (in its current incarnation):

When wolf-shifters kill Gemma’s sheep, she knows exactly who to blame: the Greenwood wolf-shifter clan whose estate borders hers. But the first clan member she runs into denies their involvement. He has the audacity even to claim that she is lying. If she didn’t have to control her anger in order to keep her vampire nature from getting free, she would show him. But if there is one constant in her life it’s rigid self-control.

Kieran Garret has one formative childhood event: his brother being shot as a sheep killer by humans. When an enraged vampire storms in to accuse his clan of killing her sheep, his grief and anger surface anew. Unable and unwilling to release his anger on Gemma, he sets out to find the killers, Gemma by his side. He has his clan to protect.

Their cooperation isn’t easy. Vampires and shifters don’t really get along, but a bigger issue stands between the two, the death of Kieran’s brother. As the killings continue, this time angering humans too, they have to find a way to see past their hurt to protect the clan. But it may well be that the biggest monster is already among them. Gemma’s control of her second nature is precarious. What happens when the monster gets free?