I finished reading J. R. Ward’s Lover at Last over the weekend, the latest in her Black Dagger Brotherhood series. Those of you who aren’t familiar with the series, it follows a group of vampire warriors living in Caldwell New York. Each book is built around a romance of one brother, but since the books are told in the multiple points of view, some storylines are carried on from book to book, allowing them to mature at a slower pace. One of these longer stories has been that of Qhuinn and Blaylock, which has now been brought to a conclusion in Lover at Last. 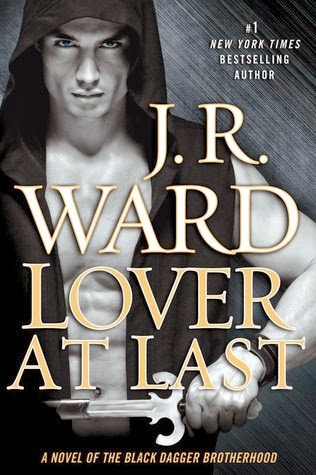 Gay characters aren’t very common in mainstream romances about heterosexual love, not even in side roles. Urban fantasy romances aren’t an exception, although they seem to have a more relaxed attitude towards the same sex relationships or at least gay sex. In Laurell K. Hamilton’s Anita Blake series sex isn’t limited to partners of opposite sex and Anita herself has had female partners. However, when it comes to her romantic interests, she maintains a heterosexual norm.

The idea of a gay romance was, therefore, intriguing when J. R. Ward first introduced it at the beginning of the series. That two vampire warriors-in-training might fall in love was a fantastical idea, especially since all the love stories in the books so far had been between huge, brutal warriors and physically very much weaker women, the contrast being played to its fullest. At first, though, it was depicted as one-sided infatuation Blay felt for Qhuinn and it didn't seem to go any further than that. The story didn’t go away, however, mostly because it was so great. But it wasn’t going anywhere fast either. Lover at Last is the eleventh book on the series and the two characters were introduced already in the second book. There were more important characters that needed to have their stories told first, but I’m sure most readers of the series would admit that Qhuinn and Blay were ready to have their story told a couple of books back already.

J. R. Ward may be a ground breaker, but she managed a good job writing a gay romance. She steered away from stereotypes, allowing the two men to be exactly the fierce warriors they are, didn't brush over the sex scenes, and wrote a believable happy ending. Still, I can’t help asking, would she have been able to pull it off if her characters had been human? Would readers of norm romances have accepted gay romance as easily, if Qhinn and Blay had been – say – human soldiers instead of vampire warriors? Since so few mainstream romances dare to introduce gay characters, I’m fairly sure the answer is no. The otherness of vampires and of paranormal elements in general make it easier for readers to accept two men loving each other. And even in the plethora of urban fantasy and paranormal romances, Ward’s book seems to be unique. None of the other UF series I follow have anything similar going on.

So I guess a thank you for Miss Ward is in order that she didn’t shy away from Qhuinn and Blay's romance, didn't take the easy way out her own story presented and follow the norms of the romantic genre. Who knows, maybe with this opening we’ll see more gay romantic leads in mainstream romances.