The year and the decade are ending, so it’s time for the traditional look back to what I’ve done. If I look at the whole decade, I’ve achieved a lot: I fulfilled my dream of becoming an author. I published my first book in 2012, and it’s been a great journey from then on. The learning curve has been steep, but I believe I’ve come a long way since. All in all, a brilliant decade.

This year, however, is a mixed picture. I can start with what I haven’t done: written this blog. Despite my best intentions when the year began, I only managed five posts (six if you include this) the whole year; three less than the previous year, which I thought was the low point.

On the positive side, I manged to revive my reading blog, Susanna Reads. I wrote twenty-six posts, so approximately one post every other week. However, considering that I read sixty-five books this year, it’s not much, and I didn’t manage to review everything I read. I’ll try to do better next year.

I published two books. Crimson Warrior, the book 6 in the Two-Natured London series, came out in March. It went fairly unnoticed, but the sales have picked up towards the end of the year. If only I could get people to review it, it might become more popular. 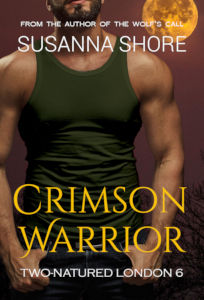 The second book I published was Tracy Hayes, Tenacious P.I., also a book 6, this time in the P.I. Tracy Hayes series. It has sold well, with the best pre-order sales for me ever. However, the reviews haven’t shown up yet either. In addition, I began to write several books, a couple of which will actually be finished too. Eventually. All in all, I've written about 128.000 published words and roughly the same number of unpublished words.

Financially, the year was better than the previous one. I’m still on the red, but less than the year before. That’s mostly due to publishing one book less than the previous year, which cut the costs. The income was roughly the same, maybe a little less. I spent less on advertising, having learned my lessons there. Mostly I advertise on Amazon these days, which I have found to be the most effective platform for it.

On a personal level, this has been a year of small health problems. I was diagnosed with high blood pressure and asthma, and I’m learning to live with both. Luckily neither of them is severe, so I’m doing just fine with medication. I also suffered shoulder problems the whole year. First the right shoulder and then the left had infected rotary cufflinks, which limited the arm movements and caused great pain. But on the upside, as I was dealing with that, a physical therapist showed me a proper way to sit at my desk, which made my chronic back pain vanish almost completely.

All in all, a mediocre year. There were no great breakthroughs, and no great disappointments. I still love writing and I intend to continue the next year too. I hope you’ll stay with me. Happy New Year and new decade to you all.