And so the year comes to an end…

It’s that time of the year again, time for retrospection. It has been a long year in many respects, but I’ve been happy with my year as an author-publisher. There were some highlights, like visiting WorldCon in August, and not so bad lowlights that they would pull the entire year down.

I began the year with a bang by publishing two P.I. Tracy Hayes books that I’d written back to back at the end of the previous year. It was an intensive writing period and after it my brain needed time to recharge. Not that I realised it at first. I tried to write both of my ongoing series, Two-Natured London and the next Tracy Hayes book, but both got stuck after a few chapters.

Instead of pushing doggedly on, I decided to write something completely different. I’ve had this idea of a book brewing at the back of my brain for a long time, and I gave it a try. The project occupied my time suitably for most of the summer, and the writing process was interesting, not least because I aimed at a longer book than what I usually write. I almost finished the book too, reaching the climax of the story before I ran out of words. Basically, something went wrong with the plot somewhere along the way, and until I’ve figured out what it is and fixed it, I can’t finish the book. So far, I haven’t done it.

But the side project worked its magic on my brain and I managed to start writing the next Two-Natured London book again. It was going well too, until I absolutely had to write the fourth Tracy Hayes book – my brain is weird that way. This time the stars aligned and it took less than a month to write it from the first chapter I’d managed in the spring. P.I. with the Eye came out in November and sold nicely enough for as long as the price was only $0.99. Now it’s slowed down a bit. But more important than the sales for me was the knowledge that I’d managed to see through one project this year from start to finish.

After the book was published, I didn’t instantly return to the sixth Two-Natured London book. Instead, I had an idea for a collection of Christmas stories set in the Two-Natured London world, and set out to write them. I’ve never been all that interested in writing short stories, but these I found easy and fun to write. In no time at all I had six stories that make a nice little book. Since I started the project so close to Christmas, it’s been a race with time to get them out before it, but I think I can make it.

The only lowlight of the year has been this blog that I haven’t managed to update with the same regularity than before. Mostly I’ve recapped the books I’ve read. It has been fun, but hasn’t provided enough posts. Still, all in all, the year has been good. Two books written and four published. The next book is well under way and will come out early next year. I can retire for the holidays and rest until the next year. Thank you for following my year and I hope to see you next year too.

How do vampires spend Christmas? My short story collection Moonlight, Magic and Mistletoes, a Two-Natured London Christmas Special has six short stories, all of them sweet, Christmassy and romantic. The opening story, Escape on a Moonless Night, is the longest and is set in in 1660s France. In it, we learn more about the past of the vampire lord Alexander Hamilton, the leader of the warriors of the Crimson Circle. He’s forced to flee after marriage negotiations turn sour, and he’s not fleeing alone. In other stories we meet old and new characters from the Two-Natured London books, and follow how vampires, humans, and shifters find love and Christmas magic in the unique two-natured way. I’ll add a link to the collection here the moment it comes out. Stay tuned. Until then, you can read the opening chapter here. 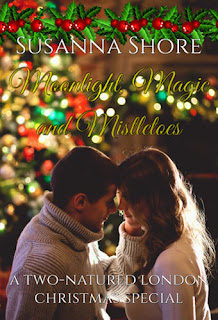