Stranger at the station – a short story

Despite my best intentions, I haven’t blogged here in ages. To remedy that, here’s a short story to entertain you. 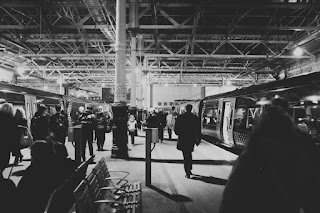 Stranger at the station

I stalked a stranger today. At the Paddington station on my way to work this morning. It’s not a pastime I indulge in often, and never in this intensity, but he was different.

I noticed him instantly when I walked into my usual café at the station for my morning latte and took a place in the line. He was so out of place here I couldn’t help but see him. He was sitting at the far table by the low railing that marked the border of the café, reading a paper, a cup of coffee in front of him, ignoring the people around him like he was inside his own bubble.

A man waiting. With purpose.

I was instantly intrigued. Who was he? Why was he here? Who or what was he waiting for? I could barely tear my eyes off him, almost forgetting to move forward in the line. I wasn’t the only one, mind you. Everyone watched him.

He was definitely the kind of man you notice. A bespoke suit that fit his lean body like a glove, and handmade Oxfords. Mother of pearl cufflinks and silk socks. Hair cut neatly and recently by an expert. In his mid-forties, which when you’ve entered your fifth decade yourself, is just the perfect age for a man. Especially if the man wears his age with such self-confidence as he did. Not classically handsome as such, but he had an assertive face of a person accustomed to being in command.

A businessman, definitely. One with hundreds of employees and dozens of underlings ready to fulfil his every command. He would never be unreasonable with his requests and always graceful when they were met, causing his people to want to please him even more. I could see it all in my mind’s eye: a secretary blushing faintly every time he praised her, her heart picking up speed. Her nights would be filled with impossible dreams of the two of them together.

He wouldn’t even notice. The bastard.

You didn’t often see men like him at train stations. They belonged to first class lounges at airports – if they travelled commercially. He looked like he could afford his own jet.

Perhaps he was waiting for someone. He sat so calmly there, leaning his side against the backrest of his chair, long legs stretched before him, one ankle crossing the other, occasionally glancing at people walking past the café – never those inside it. He never checked his watch, a timepiece so understated in its elegance it had to be expensive. He wasn’t in a hurry to catch a train.

I was so preoccupied with him I almost missed my turn to order and then fumbled with the change. Who was he waiting for? Not a business partner, obviously. They would see him in a glass-walled office at the top of a high-rise, or in an expensive restaurant. Or in a gentlemen’s club. But not at a train station. He would never meet anyone at a train station.

That idea appealed to me instantly. The newspaper he was reading was a sign from which the contact would recognise him. The contact would then ask for a time, and he would glance at his expensive watch and give it, only it wouldn’t be the correct time, but a code.

My name was called to get my coffee, which interrupted my musings of international espionage. I didn’t really believe he was a spy anyway. He was too noticeable to be one.

With my coffee ready, I didn’t have a reason to stay anymore, but I didn’t want to leave yet. He was still here, waiting. So I paused on my way out, daringly quite near him, and began to dig my phone out from my bag. I would pretend to have a call so people wouldn’t wonder why I was standing there.

But before I could find my mobile – the bag is insanely large, I don’t know why I keep it when I can never find anything in it – the man checked his watch and then finished his coffee in one. He was about to leave. And I still hadn’t figured out who he was waiting for.

What if it was his wife?

That idea stung. I don’t know why. He was miles beyond my league – even if I had been blessed with self-confidence that stated no man was beyond it, which I wasn’t.  Men like him didn’t go for forty-one-year-old librarians. Not the dowdy-ones anyway. He hadn’t even glanced at me and I had stood almost in front of him for a good while now.

But that’s imagination for you. I could picture him as a spy, easily, and I was perfectly willing to entertain an idea of a passionate affair with him, even though I knew there was no chance for it – but only if he was free. I couldn’t imagine a wife away.

Belatedly, I checked his ring finger and found it empty. The relief I felt was disproportional. If he had been here to meet his wife, he would surely have worn his ring.

Just then, the loudspeakers announced an arriving train. I couldn’t hear from where, but the man immediately folded his paper, got up and headed out without a glance back. I followed.

I didn’t mean to. I was already going to be late for work, having dawdled in the café, but I didn’t care. I had to see who he was meeting with.

His mother? That I could believe. He had the air of duty about him that stated he would fetch his mother from the station should she so request. But I would imagine, too, that he would feel impatient if he was forced to abandon his empire for it. Instead, he had sat there so calmly, not annoyed at all that he had to wait. So not the mother, then.

He walked towards the correct platform in such long strides I had trouble keeping up with my short legs and high heels. Was that excitement I detected in his step? Who could cause such an assured man to suddenly hurry up so as not to miss the arrival?

A mistress, of course. No, a fiancée.

My heart fell. But I couldn’t give up now. I had to see for myself.

He reached the platform and I hurried to catch up. He paused and I did too, standing so close to him I could smell his divine aftershave. I pretended to be waiting for someone too, though why I bothered, I don’t know. He didn’t glance around; he had eyes only for the train that glided to halt just then, and the first class car – naturally. He looked almost impatient now. Considering how calm he had been until then, I found this to be quite out of character.

The door to the first class car opened and a gorgeous woman in her early twenties peeked out, tall and slender with a dark red hair that reached the small of her back in luscious waves. I’d always wanted a hair like that instead of the thin strawberry blond that was fizzy no matter what I did. I was instantly consumed by envy.

The man smiled, a wondrous sight that took my breath away, and lifted his hand to catch her attention. Of course he would have a beautiful fiancée, but a woman that young? I was dismayed.

The woman spotted him and her face lit. “Dad!” she yelled, jumping down on the platform and starting towards him.

All my fantasies came crashing down with one word. Not in one of them had he been a father, let alone to a grown woman he was now hugging warmly like they hadn’t seen in ages. International businessmen slash spies did not have children. I felt cheated. Then angry. I had wasted my morning on him and now I would be late and my boss would yell at me.

Well, she wouldn’t yell. She was a very nice lady. But still. With a huff, I turned around and headed to the nearest exit.