I’ve been virtually travelling around London for my next book, Her Warrior for Eternity. Some of it is to scout locations, but quite a lot has been to gauge distances between them. My heroine, Corynn, likes to run from place to place, which has forced me to study the map. How long would it take to run from Holborn to Greenwich? Would a regular runner be able to do it? How much longer will it take to run the north bank than the south?

People often move from place to place in books. Some of it is superfluous action that doesn’t require special knowledge about distances and the time it takes to reach a certain place with certain means. A drive to a grocery shop doesn’t have to be described to a minute, as long as readers are made aware that time has passed.

Occasionally though, action happens during the transit. Discussions for example. Even a short journey – a lift ride – is difficult to determine correctly, and a discussion that takes place during it can appear either too short or comically long. Travelling from UK to Australia takes over a day. An entire book can happen in that time.

Historical novels present a whole set of different difficulties when it comes to measuring distances and the time it takes to travel them. The road conditions, the slowness of horse-drawn carriages, or the lack of train connections can confound the modern author. It took days for the eloping couple to reach Gretna Green from London even in the best conditions. And the difficulties multiply when the author tries to move large masses, like troops. It took weeks to move an army to a battle field before cars made it slightly faster. Taking that into account can frustrate an author who needs to fill the gap with action. (In epic fantasy, one can ask a convenient god to open a tunnel from one end of a continent to another and move the troops in hours. But I digress.)

Occasionally, the travelling time is essential for the action. A character has to reach a certain point at a certain time. A bomb is about to go off that has to be stopped in time, but the hero or heroine has to get through the entire town to reach it. So how long will it take?

As an author, you can wing it, of course. If you state that it’s possible to get to one end of Manhattan to another in fifteen minutes during the rush hour, then so be it. But your readers might find the blatant disregard of facts annoying or even disrespectful.

Luckily, you don’t always have to guess. Google, for example, tells how long it takes to travel from one point to another – by car – and helpfully estimates how much longer it will take during the rush hour. Simply type ‘distance between a and b’ and you’ll have an answer in hours and minutes. 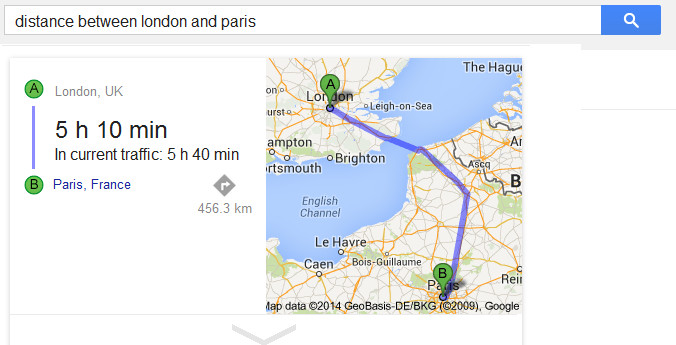 The search gives the distance between the places in miles or kilometres too, which is helpful if your character is travelling on foot, like mine often is. Even if they are only estimates, and the route isn’t necessarily the one you would choose for your characters, it makes it a great deal easier to plan believable action. If you only have fifteen minutes to get your dying character to a hospital and the nearest is half an hour away, your character won’t make it. Unless, of course, you decide that they will.

Now, if only there was an app for estimating the travelling time in historical conditions too…


This is my 100th blog post. I wrote the first post in June 2012 and have blogged more or less regularly once a week since. Most of the post aren’t worth remembering, but a couple of them have kept readers’ interest: