I promised ages ago to regularly review books on my blog, but I’ve been somewhat remiss of that. I’ll remedy that this week with a review of This Land: That Ribbon of Highway. It’s the new book by my editor Lee Burton, the first book in his sci-fi series of four books. 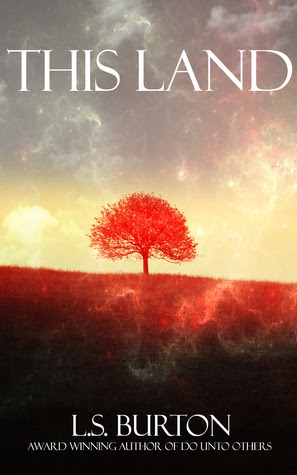 I reviewed Lee’s book Ella on this blog earlier. It’s a short story of a young girl growing up and losing her childhood imagination; a wistful, beautiful book. Lee’s strengths are his ability to create believable, real characters and his beautiful language, both of which make This Land special too.

This Land is listed as science fiction, but perhaps more correct definition would be speculative fiction. The concept is intriguing; a planet that is terraformed with humans on it, unable to fight back. How will they react, what will they do to survive?

I gave This Land five stars on Amazon and Goodreads. It is a great book, and I warmly recommed it to everyone. Take a look.

What if your planet were being terraformed by an outside entity, and there was nothing you could do?

On the surface, This Land is a simple story. A remote fishing community is faced with an alien threat so deadly that the inhabitants have no other option than to shelter inside the thick walls of an ancient monastery with no contact with the outside world.

The story begins with the characters already in the middle of action, reacting to the destruction of their village. No backstory is given, no introductions are made. The reader is only gradually given more information about the community and, indeed, the whole world. We don’t know anything more than the characters do. The tagline is the only clue a reader has for what is happening, but the origin and purpose of the annihilation of humans remain a mystery.

This Land is a sci-fi novel, but that isn’t immediately obvious, nor is it terribly important. The community is very earth-like and only little details like multiple moons, strange religion, and fauna that don’t exist on earth give a reader to understand the novel is set on another planet. Why the place is so earth-like – more specifically like earth in about 1930s – isn’t explained. Perhaps that mystery will be solved in later books. The strange star in the sky and monsters bent on annihilating humans remain, therefore, the main sci-fi elements.

This Land is, first and foremost, a study in human character. Burton has enviable ability to create flesh and blood characters with a seeming ease. He brings together a bunch of very ordinary, simple people that are bound by a common threat, and proceeds to show how they’ll react in such a situation. His characters aren’t heroes or villains, just humans with their weaknesses and a very few strengths. No one leader rises among them, nor do they automatically turn into a coherent group working towards a common goal. To the end of the first book, they remain scared and confused, reacting only when they absolutely must.

The main character, Stephen, through whose eyes most of the story is told, is an especially wonderful character. He is a cowardly, indecisive, and selfish man who is difficult to like at first – mostly, I presume, because he reacts exactly like most of us would when faced with such an overwhelming situation. As the story evolves, he finds some backbone and becomes, if not likeable, at least vindicated in the eyes of the reader. It’s rare to find such a human character in a genre novel.

This Land is, in the end, a small novel. Nothing much happens in it. People are afraid, they react stupidly, and they die. If there is one thing to criticise, it is that some of them die too fast before a reader has grown attached to them enough to mourn for them. The story is very universal, however, and larger than it seems.

I recommend This Land to anyone interested in character-led novels, whether they like sci-fi or not. The concept is unique, the world intriguing, and Burton’s beautiful language alone is a good reason to read it. Moreover, despite the destruction, the end is hopeful, giving readers a cause to return for the next book too.