I love maps; always have, ever since I was a child. I love all kinds of maps from historical maps to road maps and atlases. I’m good at reading them, too, and usually end up as the navigator on family vacations to strange places; we’ve seldom got lost and have always found back home.

In addition to being helpful in practise, I find maps a great food for my imagination. I like to imagine what the places that are only lines on paper will look like in reality. They don’t even have to be maps of real places; those imaginary maps in most fantasy books are vital for my enjoyment of them and I consult the maps often during the reading. 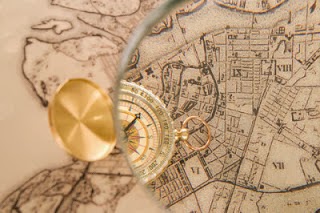 I use maps when I write my own books too, although the books themselves don’t contain them. I want to see the places where my characters live and work, the routes they would take between the two and the transportation they would use. Sometimes I’ve changed locations for either or both because I’ve thought the commuting too much of a hassle; it’s easy to relocate when you can do it on paper. I've been writing a historical novel too that would be absolutely impossible to imagine without the help of old street maps. Maps, therefore, affect my writing.

Modern technology has added an extra dimension to all those maps: Google Street View. With a click of my mouse, I’m transported to another town to witness places I wouldn’t otherwise have access to. When I plan locations for my characters, I pick a neighbourhood on the map and click closer to see if it looks and feels like the kind of place where my character would live. If not, I’ll simply choose another one until I find one that fits. The pictures on Street View have all sorts of little clues that help me make up my mind. Maybe I’m looking for a family neighbourhood, but the street is filled with sport cars that give me a notion of a place where only single men live; maybe I want a neighbourhood for wealthier people, but the houses on the one I’ve picked need repair and the shop fronts are boarded over. So on to the next street.

I also use Street View to make action scenes more real. In At Her Boss’s Command, for example, Emily, the heroine, flees from point A to point B. With the help of Street View, I could describe her flight with greater detail, add little obstacles on her path to make everything more realistic. Street View prevents me from making embarrassing blunders too. The same scene, the way I originally wrote it, would have taken her straight through a huge construction site that wasn’t on the map but was visible on Street View. I could have made her round it, but in the end I relocated the entire scene to a more accessible location. I don’t know if readers would have known about the construction site, but it bothered me so I changed it.

Finally, I use Street View when I’m stuck in my narrative; when what I’ve written feels lifeless or when I can’t find the right words. I look at pictures of real places and start describing them to my readers, adding details that transform my narrative from dry words to something more alive.

So, here they are, my reasons for liking maps. Next time that you are stuck in your writing, try opening a map or Street View. Let your imagination free and see if it doesn’t help you too.
- January 21, 2013