The book that wasn’t supposed to be

Every once in a while, a book wants to be written. The need to realise an idea or a story in words becomes so strong that I leave everything and start writing. Often, the ideas fall flat, resulting in only a few feverishly written chapters that don’t lead to anything. But occasionally, a book is born.

This spring, the story I needed to follow was that of an assassin. The spark was a random tweet asking what kind of a sound a tennis ball made hitting the racket. My answer became the opening line of the book:

The sharp retort of a ball hitting the centre of the tennis racket reverberated around the court.

I left it at that. But a half hour later, I realised that instead of writing the book I was working on—the sixth Two-Natured London novel—I was imagining the scene that would follow from the opening line. And I simply couldn’t continue with the job at hand until I’d written the entire first paragraph:

The sharp retort of a ball hitting the centre of the tennis racket reverberated around the court. The sound was much like a single round from a marksman’s rifle with a silencer on. His rifle.

The opening chapter flowed naturally from there and in no time at all I had the entire story pictured in my mind. A clever assassin and the agent trying to find him. I gave myself three weeks to write the story, chose a strict frame of twenty-one chapters, thousand words each. It would be a compact novelette that would purge the story out of my system.

Three weeks flew by. At the end of it, I had about the 20 000 words I had decided on. But instead of a full story, I had maybe a half of it. As the story had unfolded, the motivations behind the assassination had become more complex. I’d added new point of view characters and a subplot. Much more was needed to finish the book. Now I had to make a choice: do I leave it be, or do I continue: restructure what I’d already written to match the pace of a longer book and see where that takes me.

I chose the latter. And I don’t regret it, even though finishing the book took me longer than I’d anticipated, and there were more rewritings than I could have imagined. Pantsing a thriller isn’t an ideal approach; the story becomes unnecessary convoluted as new ideas pop up and they have to be fitted in the overall story, sometimes with forceful tweaking that either works or not, in which case a rewrite is needed. And when I finally reached the end and figured out the motivations of the antagonist, it didn’t match anything I’d written so far. So I had to rewrite it once more.

Diving into a book head-first has other drawbacks too. Story-flow takes precedence over fact-checking. I called my protagonist Agent Morris, as she works for the MI5, only to learn much later that MI5 doesn’t call their personnel ‘agents’ but ‘officers’. Agents are their non-staff informants. The plot that relied heavily on the British government trying to sell Wildcat helicopters to Saudi Arabia unravelled towards the end, when I had time to do some research on British helicopter industry and learned that the manufacturer is owned by the Italians now. So another rewrite was needed.

The book isn’t quite finished yet. Once the plot is logical—and hopefully exciting—there are the characters to think of too. They grew fairly organicly at first, as pantsed characters do, so some fleshing up is required there as well. But I’m almost done, and hopefully the book will be out in September. It won’t be a 40 000 word book though; it grew into 65 000—a long way from the novelette it was supposed to be. Sometimes that happens. A book that wasn’t supposed to be is born.

The Assassin will be published on September 23. You can preorder it here. 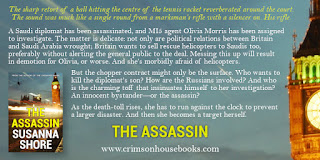