When I began to publish my own books in 2012, one thing seemed obvious. I couldn’t publish different genres under one name. It would confuse my readers and possibly accidentally make them read books in genres they didn’t want to. They’d naturally be upset for this.

So from the beginning, I’ve been publishing with two author names: Susanna Shore for paranormal romances and Hannah Kane for contemporary romances. I even had a pen name ready for historical romances, but I’ve never got around to publishing those, and so haven’t needed it. Incidentally, I have a folder full of unfinished regency romances.

From the start, the two author names were a hassle. Do I create different webpages for them, and social media identities? I tried the first, which resulted with such a complex system of pages that I had no idea what was where. It also took me a great deal of time to keep each page updated. Fairly soon, I collected my pages under one address, crimsonhousebooks.com, which made my life easier. My social media accounts were under that umbrella also, hence my twitter handle @crimsonhouseboo.

But I couldn’t really have an effective, enjoyable social media presence under such an impersonal name, so I made the decision to use one author name for all my social media instead. I chose Susanna Shore for that. While it, too, is a pen name, Susanna is actually my given name, so it felt more personal to me. And I’ve been happy with my decision.

Little by little, Hannah Kane was side-lined completely. Those books didn’t sell – at all – so I never wrote new ones and concentrated on my paranormal romances instead. And when I wanted to write something different, first a thriller, then a series of light mysteries, I chose Susanna Shore as their author.

By then I’d come to a conclusion that readers might actually be able to discern between genres, even if the author name is the same. And so I started to think that I should give up Hannah Kane altogether. I should publish all my books as Susanna Shore and let readers decide what they want to read.

It’s been a slow process of letting go. Even though I’d decided to republish Hannah Kane books as Susanna Shore, it made me sad to give up that part of my author’s journey. And I knew some of those books needed editing too, for which I didn’t seem to have time, so I postponed the change.

But I couldn’t postpone it forever. So when I had a bit of time in my hands, I made new, uniform covers for the books and went through the contents with a critical eye. And now they are ready to be published.

The first three books to be republished are It Happened on a Lie, a fairly short romance of lies and misunderstandings, To Catch a Billionaire Dragon, a book about a fantasy author and a billionaire who inspires her, and At Her Boss’s Command about a PA whose job depends on the new CEO. They’re stand-alone books with no recurring characters, but I chose to publish them under a series name anyway, mostly to give them more visibility in searches. I chose Contemporary Romances to Go, as they are light, quick books you can read anywhere.

And here they are: 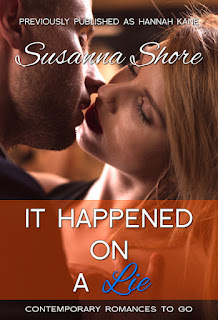 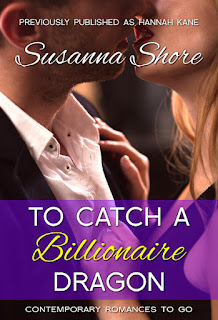 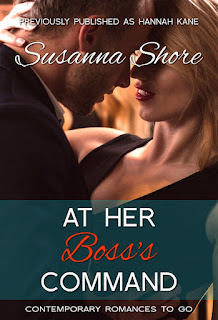 You can preorder them on Amazon (here, here and here) and Smashwords (here, here and here), and they’ll be published in February 6. You can read more about each book here. I’m really feeling positive about this change, but I’ll have to see what it brings with it. Hopefully new readers.
- January 31, 2018