Working with the editor: a case study

Editing has been on my mind lately, as I’ve been preparing Tracy Hayes, P.I. with the Eye for publishing. As a happy coincidence, Delilah S. Dawson had a lengthy tweet chain about the topic too, prompted by her annoyance with aspiring authors unwilling to make changes that editors suggest to their books. Her response, in short, was that no author escapes the changes, so you’d better get used to them from the start. Her notes are useful to read in full. 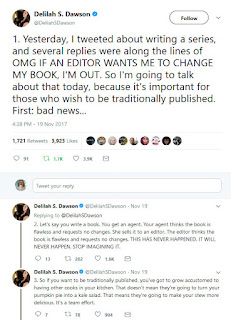 She was speaking from the point of view of a traditionally published author who has more than one set of editors making suggestions and demands, all of which strive to make the book as good as possible. She doesn’t claim it’s easy to let other people to have their say, but that it’s necessary.


Listening to one’s editor is even more crucial for self-publishing authors, as we lack the gatekeepers of traditional publishing. If you’re lucky, you find one who understands your writing, and who isn’t afraid to tell you how you can improve it. If not, you have the annoying task of finding a new one.


I’ve been working with the same editor, Lee Burton from Ocean’s Edge Editing, since 2012. We pretty much know what to expect of each other by now, but that doesn’t mean the process of fixing the manuscript is a shoe-in. There are different layers to the edits, all of which demand careful attention.


Mostly in my case, it’s about the correct use of language. I use incorrect grammar and words, in this case British English words instead of American, which there were more than usually. In my defence, I’d been writing another book right before this one in British English. He also suggests words that might fit the style better, but these are always suggestions. The final decision is mine. However, I always think them through carefully. Sometimes he has misunderstood my meaning and made suggestions based on that, which in itself is a reason to make changes to my writing. Clarity is the key.


It’s also about sentence structure. Lee likes tighter sentences than I do, hears a different rhythm than I, so he makes quite a few changes there. Sometimes I agree with his changes, sometimes I don’t. Being my own publisher, I can make my own decisions about them. That doesn’t mean I make the right choices, but I have to own them.


Then there are the larger issues of plot, characters and pacing. The greatest fear the new authors seem to have is that the editor forces them to make changes they don’t want to one or all of these. We’ve all read about authors who have been told to add a romance plot to a thriller, or change the point of view from the first person to third, all to make the book sell better. Delilah S. Dawson has good comments about that in her twitter rant too. Mostly it’s about what’s comfortable to you. Everything is negotiable, if you can make a good case for yourself.


Usually, though, editor’s suggestions spring from the manuscript itself, to make it better. Editor doesn’t tell you exactly how to fix the pace or the plot, and then expect you to follow their suggestion to the letter. They challenge you to read your text with different eyes. This time I’d managed to pace the book well, but if needed, Lee points out where the pace lags, or if a scene isn’t quite in the right place. I’ve only ignored his suggestion once. He found the ending of one of my books abrupt, but I didn’t change it, and the first reader to review the book made a scathing comment about it. In my defence, a year later, I still don’t know how I should fix it.


And then there’s a lot of fine tuning. This time round, it concentrated on the first paragraph of the book. Every author knows that the opening sentence and paragraph are crucial, so I’d really put some thought into them. I thought I’d nailed them too. Imagine my dismay, then, when the first thing I see opening the edits were two lengthy comments about the opening paragraph. In short, Lee didn’t think it worked at all.


This is the original opening:


I was trying to keep a tray-full of champagne flutes from gliding to the floor when the thief struck. Not me, or Mrs. Snobby-as-fuck I was serving would’ve got her jewel-adorned cleavage doused with champagne -- or the sparkling white wine the glasses actually contained, and about which she’d been complaining to me for the past five minutes.
I was sorely tempted to soak her anyway.


I was trying to keep a tray-full of champagne flutes from gliding to the floor when things went south. Not the tray, or Mrs. Snobby-as-fuck I was serving would’ve got her jewel-adorned cleavage doused with champagne -- or the sparkling white wine the glasses actually contained, and about which she’d been complaining to me for the past five minutes.
I was sorely tempted to soak her anyway.


But Lee liked this version even less. It removed the hook of the thief, and he found ‘went south’ to be a cliché. In his words: “The issue as I see it now is that by removing the connection between the second and the third line (the struck pun), we have to find a new way to get from the good hook to the lady. The issue is made difficult as we're introduced to the idea of there being a thief and a robbery, but then we're taken back in time thirty seconds to the conversation with the Snobby-as-fuck lady, and then walked forward in time until the fire alarm goes off, so it would probably be useful to – in place of the pun – acknowledge the time gap, and then switch up the circumstances around how Tracy comes to the idea that she could use a good dousing with champagne. Something like...”


And then he gave me a number of suggestions of how I could fix the issue.


I spent an hour or so going through his suggestions, trying to fit them into the paragraph and into what I wanted to say. I consulted my sisters who didn’t like my earlier versions, so I kept working on it. Eventually, it turned out like this:


I was trying to keep a tray-full of champagne flutes from gliding to the floor when the thief struck. I was serving Mrs. Snobby-as-fuck at the time, and contemplating her impressive, jewel-adorned cleavage with fascinated horror. I was kind of hoping one of the milling guests at the upscale party would nudge me from behind, so that I could “accidentally” douse her with champagne -- or the sparkling white wine the glasses actually contained, about which she’d been complaining to me for the past five minutes. But no one bumped into me.
I was sorely tempted to soak her anyway.


This, finally, found everyone’s approval, though Lee would’ve wanted to remove the last sentence of the first paragraph too. That one I kept though, as it serves as a bridge to the punch-line.


All of this took more than a day – though mostly because Lee and I live in different time-zones. It wasn’t an easy process, but it was a necessary one. I think the opening paragraph is stronger because of the changes, but I would never have thought to make them. So, an editor is definitely necessary – and nothing to fear. It’s not always easy to let go of words you’ve carefully chosen, but if you do, you can get something better in return.


What do you think, did the first paragraph improve or not? 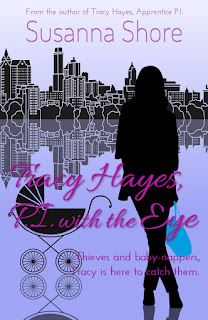