August was my worst reading month so far and I only managed to finish two books. I have no excuses other than that I was busy working. I did start two more books, but I didn’t manage to finish them in August. And even though I read eight books in July, I’m now two books behind the schedule in my reading challenge of fifty-five books. I’ll have to step up. As has been my habit throughout the year, one book was from my reading list and the other wasn’t.

First book was Ride the Storm by Karen Chance, the long-awaited next chapter in her Cassandra Palmer urban fantasy series of time-travelling Pythia and her entourage of vampires, demons and mages. One vampire and one mage in particular. As always, it was a wild romp through space and time – at times a bit too wild. The first part of the book was constant tumbling from crisis to battle and back with no breathers or plot development in between, as if the author was afraid that the reader will get bored if something earth-shattering isn’t constantly happening. At this point of the series it’s getting exhausting though. I’d like some moments of reflection and recap. At least the plot-line we’ve been following for the past three books came to a conclusion – after an endless battle that took most of the last third of the book – and Ms Chance’s two series finally converged in a fairly meaningful fashion. Still, it was an entertaining book and I’m happy to continue reading the series.

Second book of the month was Our Dark Duet by V.E. Schwab, the second and last book of her Monsters of Verity duology, and third book of hers that I’ve read this year. The duology is set in some post-apocalyptic future where demons come to exist every time humans commit murders. The first book introduced Kate, a daughter of a human monster controlling the demons, who was trying to seek her father’s approval with catastrophic consequences, and August, a demon who was struggling to become as human as possible. In this conclusion of their stories they’ve both changed, August maybe more, as he has embraced his demon side in order to fight demons. Together they prepare for a final confrontation to defeat the greatest demon they’ve yet encountered, one that thrives on human emotions. It was a hefty book, yet nothing much seemed to happen. The plot sort of meandered on until the final battle. It wasn’t as emotionally engaging as the first book either, but the ending was satisfying. And even though it was only a duology, the story has room and characters for more books too. I’d very much like to read those.

And that was my reading. I’m hoping to do better in September, but it’s not looking good so far. There are great books from my reading list published this month that I’m looking forward to reading, but I’m still pressed for time. And when I have free time in my hands I haven’t been reading. I’ve been binge-watching Lucifer on Netflix – and I’m not even ashamed to admit that on a blog post about reading. It’s a great series. And do I sense a demon theme in this month’s post...? 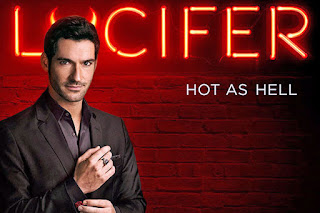