Temporality and passage of time in serial fiction

I’ve been binge watching Star Trek: Enterprise lately. I didn’t see it when it aired in 2001-2005, but thanks to the streaming services, I’ve been able to indulge. For those who aren’t familiar with the series, it’s set a hundred years before the adventures of the original series with Captain Kirk and his fellows, and follows the crew of the first starship Enterprise. I’ve always been a Star Trek fan and I’ve liked it in all its incarnations, but Enterprise might be my favourite. There are many reasons for my preference, but what sets it apart from other series is how it allows the passage of time to show.


Many episodic TV series, regardless of the genre, are curiously atemporal. Passage of time is only implied to, maybe with the compulsory Halloween, Christmas, and Valentine’s Day episodes, or if the series is set in the school world, with the start and end of the term; if it’s a long-running series, the students move from one grade to the next from season to season. Other than that, the episodes are fairly self-contained, and even if a story arc spans several episodes, its events seldom affect the following episodes or are barely referred to in them. There are almost never any references to events in the previous seasons.

Star Trek series aren’t an exception. Every episode opens with a star date, but unless you’re keeping tabs, it’s difficult to know how long has passed between the episodes. Each episode is a self-contained story and whatever happens in it – injuries or lessons learned – is forgotten by the next episode. And since they don’t even have the compulsory Christmas episodes, the passage of time disappears almost completely. The only indication of it is the child characters growing up, and even that is often downplayed. Children may grow, but adults don’t seem to age, even if the actors do. The viewer is given windows to the life on a spaceship or station, but the overall illusion is that those places only come to life when the viewer is there. Relationships spring to life only when there is audience, with the curious notion that nothing happens to it when no one is watching.

Enterprise is different. From the first episode on, the passage of time is evident. Star dates haven’t been invented yet, and it’s easier to keep tabs on the chronology when it’s expressed in days, months and years. The passage of time is part of the narrative. If a character injures him or herself in one episode, they’re not miraculously cured by the next, or at least some mention of it is made in later episodes. If the Enterprise has a technical malfunction, it may continue in the next episode too regardless of the story arc. Events of the first season affect, and are returned to, the following seasons, and they play crucial role throughout the series. Relationships come to life, grow and die their natural courses throughout the series. All of this creates an illusion of lives lived even when the viewer isn’t there to witness it.

Time is actually the driving force of the narrative. From the first episode on, references are made to a Temporal Cold War that the agents from the future wage in the past. Enterprise and its crew are forced to be a part of this war, with some interesting story arcs. The entire season three is one continuous story about the time war. And when disturbances in time take place, entire timelines change. All of this forces the narrative to pay attention to the chronology in the lives of the characters too. The end result is an enjoyable series with characters that the viewer can grow up with and get attached to.

(As a disclaimer, I haven’t seen the last episode yet, which I’ve been given to understand is appalling. I hope it won’t ruin my experience of the entire series.)

There has been a boom in recent years of series with continuing story lines, which to me indicates that the viewers want that kind of experience, but episodic series are still the stable of any network. Why else would we have three different versions of CSI or NCIS, to mention just two. Police procedural and crime series are often those most marked by their opaque passage of time. The case and solving it is what matters. Within an individual episode, time can be crucial – and often is – but between episodes, it’s only referred to in passing. When it comes to TV entertainment, it kind of works. I seldom miss the references to time, and only notice its absence when treated to a different kind of experience, like with the Enterprise.


Similar tendency to atemporality can be seen in books also, especially in serialised genre fiction. Most notable this is in crime fiction and for the same reason than on TV too: the case matters, not the lives outside it. Once the case is closed, it’s not returned to, and it has no effect on the events in the subsequent books.

But what works well for TV series, doesn’t necessarily work for books. A book is a commitment; we devote time and attention to a book, and the longer the series, the more we want in return for our commitment. If nothing ever changes in the lives of the characters, if nothing changes the characters, we get disappointed. If the author hints of developments in the characters’ personal lives and then doesn’t deliver, we feel let down. The worst are the books where exciting changes take place, only to be forgotten in the next book. My current pet peeve is Stephanie Plum series, which I continue to read in the hopes that it reaches some sort of conclusion despite the evidence to contrary.

There is, of course, a good reason to write a series that is set a bit outside of time. One is the longevity of the series. If the main characters never grow old, the series can continue forever. Also, it’s easier for new readers to pick up a book in the middle of the series and start reading without the worry of missing out on something important. Both help with the popularity of the series.


Nevertheless, my personal favourites are series that manage to combine the case by case stories with a continuous plot or developments in the main characters’ lives. I think the best examples come from urban fantasy. UF series often have a plot that spans the entire length of the series with a case-based plot for each individual book. My all-time favourite is, of course, Harry Dresden series that has managed to progress rather far from where it began in the course of fifteen books (though I haven’t given up hope that there will be more).

I’ve tried to keep the passage of time in mind in my own writing too. My Two-Natured London series has an underlying – and slow-moving – plot even though each book has a self-contained love story. And my new series, Tracy Hayes, P.I., will put an equal emphasis on Tracy’s private life and her cases. I want my character to grow as the series progress and be a different person by the time it ends. It also means that I have to write with the end in mind. It limits the span of the series, but I think that’s a good thing. It’ll keep things fresh.

What do you think? Do you prefer your series atemporal or set in time?

In news: Tracy Hayes 2, P.I. and Proud is now out. You can find it here. And the first book in the Two-Natured London series if finally free on Amazon too, having been free for years on other platforms. You can download it here. 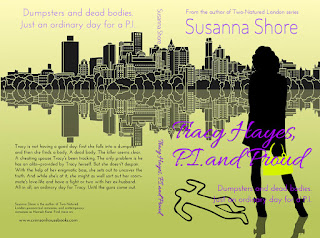