I have got the edits for The Croaking Raven back, and I thought to share the first chapter with you. I hope you like it. But first, here’s what the book is about:

Harper George, a crisis negotiator for the Metropolitan Police Service, is having a bad day. A hostage has died, the MPS has given her the boot, and she has to handle a heist negotiation drunk. It doesn’t end well.

It’s about to get worse.

A criminal organisation wants Harper to work for them. When she refuses, people start dying. The seemingly random deaths turn out to have a common nominator: Harper, and a negotiation she has failed. Someone wants revenge, but who and why?

Harper is determined to solve the mystery before more people die – and before she has to give in to the criminals’ demands. But then it’s too late. Harper has to face the toughest negotiation of her career: that for her own life. 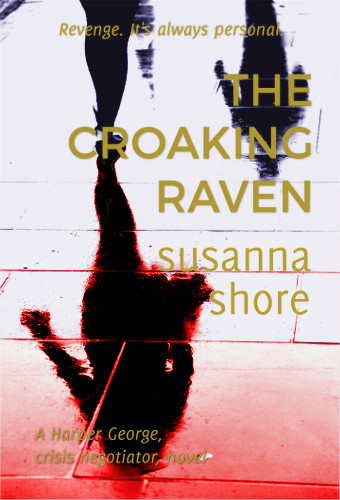 
A man walked in the pub when Harper was down to her second cup of coffee. She gave him a onceover and approved of what she saw, fairly sure it wasn’t the alcohol affecting her opinion this time.
He looked around, ignoring her and the sales rep at the bar. When the place proved empty of other people, he turned to them, frowning. “Harper George?” The question was military sharp.
Harper gave him a lazy salute. “Aye.”
He startled, as if he hadn’t expected her, but recovered and walked to her. “Garret Thomson, from Thomson Security.” He offered his hand to her. She shook it automatically, trying not to wince when his grip turned out to be military sharp too.
She had come across the type before — ex-soldier who had put his training to use by starting a security business. This one was so new to civilian life he hadn’t let go of his training yet. He was tall and fit with lean muscles, and alert like not even the cops were, as if constantly prepared for getting killed.
“Are you ready?”
“Could I see some identification first?” To his credit, he didn’t hesitate to whip out his ID, and she tried to peer at it. Close-up didn’t work so she pulled it arms-length away from her face.
He snorted, amused. “I was warned that you’d be drunk. But … wow.” He shook his head.
“Yeah, well.” She finally managed to read the ID. He was thirty-four to her thirty-six. He looked older than that, courtesy of the harsh conditions of military life. His skin looked like it had been sand-blown, and there were crow’s feet around his brown eyes. His near black hair was military short with a hint of grey at the temples. The picture was fairly recent, or he always wore a similar black T-shirt. His black cargos looked well-worn too, so he probably lived in them.
“Are you the boss himself, or is there another Thomson pulling the strings?”
“There’s only me.” His tone, a mixture of pride and annoyance intrigued her, but she was too drunk to analyse it.
“Well, aren’t I flattered. Who sent you?”
“Not trusting my word?”
“Nope.”
He nodded, approving. “Hugo Cobb, the chief crisis negotiator for the Metropolitan Police Service.”
“And why you?”
“He couldn’t spare anyone else.”
That sparked her interest. “What’s going on?” She should have paid better attention to the news after all.
“I’ll tell you on the way. Let’s go.”
Harper began to climb down from the tall barstool, an operation for her even when sober. Her legs gave under her, and he reached to steady her by her arm. “Whoa. Give me a second.” The room was spinning uncomfortably and she had to swallow to keep the contents of her stomach in.
He frowned. “We don’t have a second. Take off those stupid shoes. You’ll break your ankles.”
“Well excuse me, but not all of us are over six foot tall. I need every extra inch to make an impression.”
“You’ll make an impression all right.”
“Hey, I’m not the one dragging a drunken woman to a crime scene.”
He huffed, and before she realised what he was about, wrapped an arm around her waist and marched her out of the pub. A large black off-roader sporting the name of his security firm on its side was waiting outside the door, and he helped her onto the high back seat. “Don’t throw up in there.”
He took the front seat next to the driver, who got the car moving before he had properly closed the door. “This is Riley Wilkins, my right hand man.” Riley gave off a similar military vibe as Garret, but his hair was completely shaven and he had greater upper body bulk, which made him appear both younger and much larger.
“There’s coffee and bacon sandwiches in that bag,” Garret said, pointing at a Tesco bag on the seat next to her.
“Thanks,” Harper said, peeking in. The notion of eating didn’t exactly entice her, but she had to sober up. She opened the sandwich package and the smell of greasy bacon hit her nose, making her gag.
She didn’t want to sober up that badly.
Fighting the nausea, she didn’t pay much attention to where they were going. West, towards the City at first, but then Riley turned to the ring road that circled central London from the north.
“Where are we going?”
“Paddington.”
“What, the bear took everyone hostage at the station?” She snorted at her own witticism, but the men weren’t amused.
“No. A man has locked himself in a small branch of NatWest with hostages and explosives.”
Harper’s hand paused midway in stuffing a sandwich in her mouth. “Really? Well, that’s convenient timing. Who’s at the scene?”
“Pretty much everyone.”
“Then why am I needed?”
“Because, Miss George, the hijacker requested you.”
***

If you liked the first chapter, you can read the second chapter on my webpage